Get fresh music recommendations delivered to your inbox every Friday.
We've updated our Terms of Use. You can review the changes here.

Eyes in the Stars, Life in the Mud

by The Flying Detachment 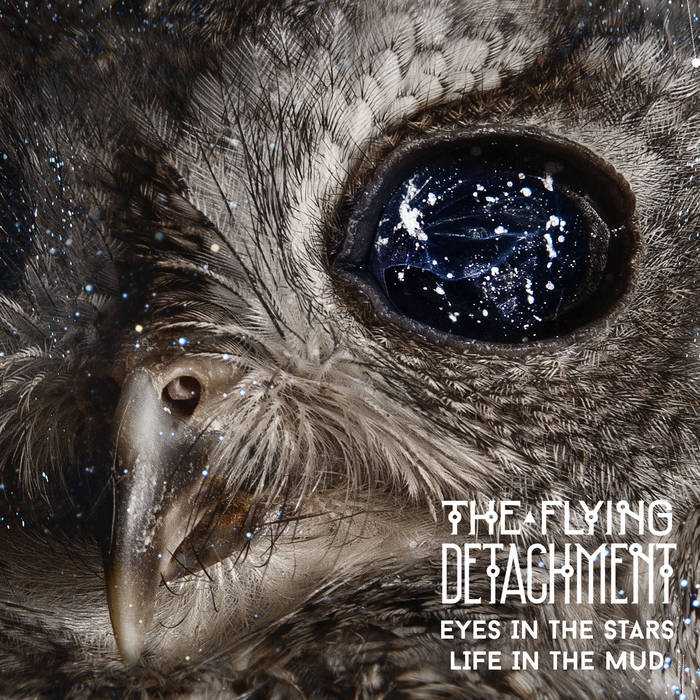 “Eyes in the Stars, Life in the Mud” is everyone’s journey deep into the abyss of uncertainty. We dive into the unknown because we want to change for the better (“Eyes in the Stars”) even though we “live in the mud”. Sometimes we decide to take action (“Seventh Way”), other times we’re just dreaming of doing the right things even though we’re not (“Resting the Bone”). In the search for meaning we discover we are equally capable to surrender to love (“Under the Tide”) or be consumed by hate (“2:58”). We are in control of our own mind and fate on the fantastic journey of life (“Hypno King”) or we spiral further down in chaos (“Ghost in the Pill”)....

Drums on "Seventh Way", "Resting the Bone", "Under the Tide" and "Ghost in the Pill" recorded by Yulian Halyov.

Additional percussion, synthesizers and sounds recorded by The Flying Detachment.

Samples on "Life in the Mud" from "Alan Watts - Sense of Nonsense".

Artwork and design by Sofia Zasheva.
Band logo by DAinsane.

Zeus the owl was photographed by Jason Bennet at the Wildilfe Learning Center in Sylmar, CA.

Enormous THANK YOU to our families, girlfriends, wives, children, dogs, friends for the everlasting patience and constant support and to everybody else, who has ever helped in any way!

The Flying Detachment is:

Heavy riffs, passionate rhythm and haunting harmonies all converge in music that is thick, dark, desperate, thrilling and headbanging.

Bandcamp Daily  your guide to the world of Bandcamp

Guests John Beltran and Kim Myhr walk us through their magical musical adventures.